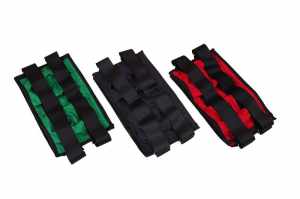 Belts loaded
Weighted belts can be made of cotton or nylon. They are worn at hip level. As with all our products, Oeko-Tex® certified fabrics are also used in the production of weight belts.

The weighted belt has a two-sided Velcro fastener (two 4 cm wide Velcro), enabling its stable maintenance, ensuring comfort and proper adjustment depending on the circumference.

Weighted cotton and nylon belts are sewn in two versions:
open (bags with the load are removable, thanks to which it is possible to change the weight of the load)
load sewn in permanently.
The weighted belts can be worn during the day, thanks to the fact that they adhere to the body and are not visible from under the sweatshirt. Thanks to their properties, they normalize the nervous system, calm down, relax, strengthen body awareness and overall coordination

Load
The load on the belt is selected individually according to the customer's needs. The load can be permanently sewn or removable, which will allow the future owner to adjust the weight of the load, if necessary.

There are two types of raw materials to choose from, which serve as a load, it can be:
natural litter
glass granules.
For whom?
Belts are recommended for people with sensory and / or autistic disorders as well as any motor and sensory ailments.

Advantages of their use
Wearing a weighted belt is effective in reducing stress.
It affects the quality of sleep, it is also a very useful element of sensory therapy in the case of all kinds of sensory and movement disorders. It is also often used during professional classes in specialists' offices. It helps in many cases, they are effective in the following disorders, including:

autism
Asperger's syndrome
down syndrome
ADHD
cerebral palsy
depression
burnout
It also has a positive effect even in reducing the symptoms of motion sickness and developing and supporting exercises (e.g. hand therapy or speech therapy).

Care
Weighted belts can be washed in water, after removing the bags with the weighted, according to the instructions on the product label. Or if the load is constant, wash with the load. The materials used for the production of weighted belts are very easy to care for and are not susceptible to dirt.

up.
Shop is in view mode
View full version of the site
Sklep internetowy Shoper Premium